Paul Murrell updated his R package ‘dvir’ and added support for the LuaTeX engine to draw typeset text in R. He reconstructed my example „Areas Under a Time Series“. His result is obviously convincing (04/2020).

„The main change from the second edition is that Part IV has been restructured. In the second edition, this part of the book attempted to cover a wide range of applications of R Graphics, but the number of ways that R graphics can be used has grown to the point that Part IV would require several volumes by itself; something that is reflected in the fact that there are now many more books that cover different aspects of producing plots in R (e.g., Thomas Rahlf’s Data Visualisation with R and Ocar Perpinan Lamigueiro’s Displaying Time Series, Spatial, and Space-time Data with R).“

„This is the book I would recommend for those who want to teach data visualisation. Examples are nice, and ready to be published. From one example to the following one, the difficulty is very progressive. It’s a very good teaching material.“

Good news: The book is free for all ACM Members (Association for Computing Machinery): 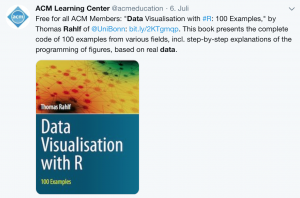 „…provides the reader with a broad and excellent overview of the various possibilities offered by R’s standard graphics package. (…) Overall, the book can especially be recommended for students and researchers that are already familiar with R and who intend to find suitable methods for visualizing their data in real world applications. Furthermore, it can also be helpful for students who want a broad overview of R and its visualization capabilities.“

Ulrike Grömping was inspired by the book to develope a package prepplot for making it easier to customize figure regions for base R graphics. See also her Vignette.

„Very interesting book to get into R for and data visualisation, with great examples on a diversity of topics.“

Some examples of the book have been added to the list Great dataviz examples in rstats, Prof. S. Sauer, Institute of Business Psychology, FOM Munich, 2017/11.

„I definitely recommend this book. The example-based approach is very successful for introducing readers to R’s graphical capabilities; readers can learn proficiency in using base R graphics for obtaining exactly the static presentation figure they envision – including ambitious infographics. (…) Last but (by far) not least, the book can be used as a collection of ideas for useful, informative and beautiful graphical displays.“

„I like the book. With my two doctoral course students, I use it as a text book for my ‚Doctoral Dissertation Research‘ course in this semester.“

„I really like this book: those 100 interesting real data examples with the detailed R-scripts for producing beautiful graphical visualisation are particularly helpful for learning R graphics. I will use it as a main textbook for data visualization for my statistics course.“

„This is a well written book for designers… Enjoy this book. I am having fun getting the code to work on other data.„

„If you’ve ever been interested in coding using R, then this book is for you. (…) If like me, you need hands-on guidance the examples (which use real data) are shown with a step-by-step walkthrough teaching you everything that you need to know.“

How to draw a scatter plot with quadrants (Brexit correlation between education and results). 2017/2

Reviews to the German Edition

„.NET developers who are interested in R can significantly expand the possibilities to develop charts.“

„The core of the book, and the actual purchase reason, are the 100 visualization examples, which are actually visually convincing, comprehensibly prepared and also beautiful to look at.“

„The diagram examples are selected for practical purposes and illustrate interesting and relevant data. (…) Rahlf’s attention to detail makes the book an eye-candy and at the same time a treasure trove of useful approaches.“

„… an extraordinarily useful companion who is able to convey a wide range of representations.“

„The diagrams and illustrations shown are really well done and make you want to follow.“

A good overview of data visualization is provided by the book by Rahlf (2014), in which the practical implementation with the statistical environment R is explained.“

„The book Datendesign mit R by Thomas Rahlf offers almost 300 pages of examples for all possible visualizations which are essentially ready for publication. A great advantage of the book is that only the basic graphic of R is used so that the concepts with lattice or ggplot2, which have more learning curve, can be ignored. This allows beginners in R to create very appealing and informative graphics, with courage for partial long-term writing.“

„Thomas Rahlf is concerned only with the graphic functions of Base R; ggplot by Hadley Wickham is not used. Nevertheless, I appreciate the work very much, since it contains a lot of tricks and with the 100 examples very practice-oriented. You do not have to work it out in chronological order, but you can pick up what you find exciting.“

„The book is really great. We have already bought two at the institute and will also recommend it.“

„The book is great, gives many examples.“

„At first I was somewhat disappointed. I purchased the e-book and found the first 100 to 200 pages for the first time superfluous. But then this book was a revelation: R and nice graphical representations were for me up until then two areas. This has probably changed for me now (finally)! The standard graphs in R work, but are not beautiful without any effort. How to do this is shown in this book. The examples will save you a lot of research in the documentation and lengthy experimentation. And on the whole, the foundations of the first pages have opened up to me. It may not be necessary for everyone, but they should not be lacking. Many Thanks“

„Overall for me a successful book, which is very nice to look and read.“

Andreas Krause, Author of „The Basics of S and S-Plus“, Editor von „Statistical Applications in the Pharmaceutical Industry“ und „A Picture is Worth a Thousand Tables – Graphics in Life Sciences„, 2014/4

„The book fills a gap. The code is well structured, the examples are not only functional, but also aesthetic. It was really fun to scroll around in the graphics.“

„Very impressive examples of visualizing data with R which are backed by very readable code.“

„The graphics look VERY professional, with some I would not have thought that they come from R.“

„Besides the beautiful images on it you will also find the codes and spreadsheets used.“

„The book is great! The introduction to the design of a graphic is very good and can be read fluently!“

ggplot2 versus Base Graphics with examples from the book: Variance Explained.

„Without data design with R: 100 visualization examples, I could not create the graphic.“ 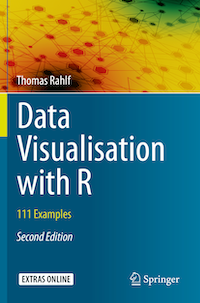